t is the smothered scream of a woman who is about to die, the last thought-river towards her husband, same destiny in another direction. It’s a poignant holocaust monologue written by Marcello Galati, journalist and author of books and theatrical works, performed on stage in voice and soul, in words and music, by actress Tiziana Risolo and guitarist Felicia Toscano. The agonized moments lived in the gas chamber, the feelings before the crematorium become on stage the mirror of the protagonist's mental labyrinth: thoughts, doubts, desires in oxygen debt, the latest of a life stripped away from her. Feelings just imagined... No one ever came out alive from those death rooms "... At Auschwitz: come in through the gate and get out of the chimney..." a sentence whose meaning will only be clear at the end. 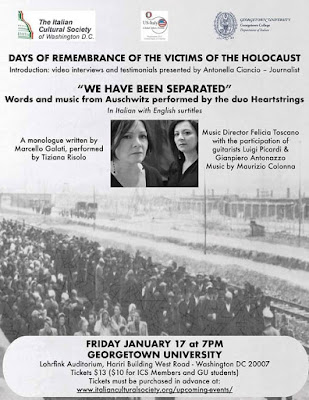 MARCELLO GALATI Italian writer and journalist. In 2014 he published a noir novel "Nuda veritas", in 2015 his story appeared in an anthology on the Biblioteca comunale di Taranto. He began writing for the stage while still employed as a radio reporter at Radio Popolare di Milano. His first play, staged in 2013, it was a farce about the affairs of the Ilva steelworks in Taranto. His love and extremely knowledgeable of jazz music has been the muse of “Sospendete l’incredulità”, an interesting college of stories about the great jazz musicians. Last summer his monologue "Tre amori" was interpreted by Tiziana Risolo at the University of Taranto.

TIZIANA RISOLO is an italian actress. She made her stage debut in “Cirano” when she was sixteen. She studied theatre at the Orazio Costa’s School in Bari. After then, she improved her acting skills attending several drama workshops. For a while (1989-1996) she worked in Taranto in a local television as journalist and speaker. In 2003 she won the award for best actress in Premio Talìa. In those years she played in a variety of roles: She was Eloisa in “Eloisa e Abelardo” written by the RAI journalist Luciano Luisi. From 2009 to 2017 she took on one of the icone of stalks took part of stalking victims’, Santa Scorese, piece written and directed by Alfredo Traversa, on stage for the last time in teatro Parioli in Rome. She played the role of Bianca Lancia, the hidden wife of Federico II during a theatrical representation written by Raffaele Nigro. But not just in theaters! She played a nun in the men’s prison in Venice, a performance about the discipline of enclosure called “Il silenzio”, by Giampiero Beltotto, also on stage in the Festival Caffeina in Viterbo in july 2013 and in february 2014 at teatro Le Laudi in Firenze. She has often been engaged in reciting Dante’s Divina Commedia, on stage and for students of high school. In 2008 she joined to convegni pirandelliani in Agrigento and in 2013 she took part of Talking Lands in Greece, with performances in Corfù, Parga, Patrasso, Grottaglie, Fasano and Monopoli.�She is also a renowned theater teacher at School of Arts in Grottaglie, linked

More in this category: « Commission’s top scientific advisers publish opinion on Food from the Oceans
back to top